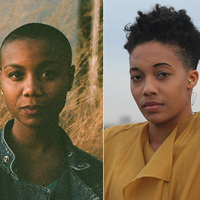 *Sunday’s Conversation with Ja’Tovia Gary and Dessane Lopez Cassell has been postponed.  We are working to reschedule and will notify everyone ASAP once a new date has been selected. We apologize for the inconvenience and look forward to hosting the conversation at a later date.*

Artist Ja’Tovia Gary (American, b. 1984) and Hyperallergic’s Editor of Reviews, Dessane Lopez Cassell, discuss Gary’s work and her installation Giverny I (NÉGRESSE IMPÉRIALE) on view at the Memorial Art Gallery  December 20, 2019-April 5, 2020. Ja’Tovia Gary is an American artist and filmmaker whose work interrogates the ways in which visual and media cultures shape our perceptions around race, gender, and specifically Blackness. Her poignant and distinctive visual language combines documentary elements, direct animation, and archival footage.

Ja’Tovia Gary investigates the distorted histories through which Black life is often viewed while fleshing out a complex and nuanced Black interior life and spirituality. Through documentary film and experimental video art, Gary charts the ways structures of power shape our perceptions around representation, race, gender, sexuality, and violence. Her work is held in the permanent collections of the Whitney Museum of American Art, Art, Design & Architecture Museum of UC Santa Barbara, Studio Museum of Harlem, and, now, the Memorial Art Gallery. She has received numerous awards and fellowships, such as a Creative Capital Grant, Field of Vision Fellowship, support from the Sundance Documentary Fund, and the 2019 Radcliffe-Harvard Film Study Center fellowship at Harvard University, among others.  Gary is also a founding member of the New Negress Film Society, a collective of black women filmmakers founded in June 2013, which seeks to create a community and raise awareness of Black female voices and stories in the film industry. She is represented by the Paula Cooper Gallery in New York, and by the Galerie Frank Elbaz in Paris.

Dessane Lopez Cassell is a curator, writer, and film programmer based in New York. A former US Fulbright fellow, she has held curatorial positions at The Museum of Modern Art, the Studio Museum in Harlem, and the Allen Memorial Art Museum. Cassell has organized curatorial projects and screenings for Flaherty NYC, Brooklyn Academy of Music (BAM), MoMA Film, and The Allen, and her writing has been published in catalogs issued by the Whitney Museum, the Studio Museum, and MoMA, among others. Cassell currently serves as Editor of Reviews at Hyperallergic.