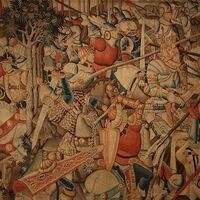 A Preview of the Middle English Roland and Otuel Romances

Join Robbins Library for a discussion of Middle English romance, ranging from medieval bros to masculinity and violence to religious conversion. A reception will follow the discussion.