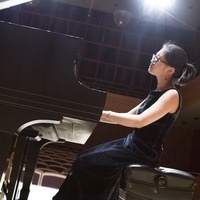 An Evening of Polish Music

Born in Warsaw, Poland, Ania Vu (née Vu Dang Minh Anh) is pursuing a PhD in composition as a Benjamin Franklin Fellow at the University of Pennsylvania. She graduated from the Szymanowski Complex of State Music Schools no. 4 in Warsaw and completed her Bachelor’s degrees with Distinction in composition and music theory from the Eastman School of Music. Ania’s music has been performed in the United States, Vietnam, Poland, and South Africa. Besides composing, Ania is also an active piano performer. As a several award recipient of national and international piano competitions in Europe, she has performed at the Royal Castle in Warsaw and three times at the Hanoi Opera House in Vietnam. She performs solo and chamber music, classical and contemporary repertoire, works of her own and of her composition peers.

Praised by the Boston Globe for “a rich voice that could go in a blink from speaking to soaring”, Paulina Świerczek made her international operatic debut in November 2016 at the Teatro Diana in Mexico and has appeared in recital across both countries, championing works of living composers and bringing fresh light to more traditional fare. A 2017 Fellow of the Tanglewood Music Center, she performed Berg’s Sieben Frühe Lieder with the TMC Orchestra, songs of Ella Fitzgerald alongside Dawn Upshaw and Stephanie Blythe, and cantatas of J. S. Bach led by John Harbison. She was thrilled to be invited back to the Tanglewood Music Center in 2018 where she had the honor of working with Tony Arnold and Yo-Yo Ma on Chen Yi’s As in a dream; she also appeared a second time with the TMC Orchestra, performing Lutoslawski’s Chantefleurs et chantefables.