Creating In Their Wake 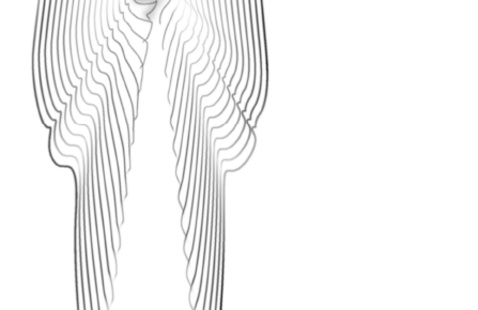 "I am a media artist who "paints" with code. My most difficult art work is memorial - "wake work" to use Dr. Christina Sharpe's words. These interactive video installations were created to remember and celebrate the Black folks who came before. In the aftermath of Eric Garner's death, I created the "Can't/Breathe Mirror" (2015), an interactive video installation where the world of the breathing is constantly mirrored in a projection composed of a moving mosaic of faces of Black people killed by police in the US. Collecting the "data" that animated the mosaic mirror involved combing through databases of police killings, finding sometimes mugshots, and preferably a picture from family mourners that captured them in happier times.

Almost every time the work was shown in public, I repeated the sad ritual to add portraits of the newly taken to the collection. https://people.rit.edu/wmhics/art/wmhCantBreatheMirror.html My most recent installation work, "In Their Wake" (2019) remembers the names of local Black people prior to the Civil War (via old directories, county records, and local history books). This memorial in a window - this street-side wake - reveals names, but only in the wake of present-day movement outside the window (via motion-capture code). Tracks of movement outside the window is reflected in revealed in swirls of video of an incoming tide, and names of our predecessors." https://people.rit.edu/wmhics/art/wmhInTheirWake.html

W. Michelle Harris is a digital media artist who uses code as a medium for engaging discussions as a Black woman in American culture. Harris creates interactive installations and produces live-mixed visuals for collaborative performances. Her artwork has been shown at such diverse venues as the ACM SIGGRAPH, World Maker Faire, and INST-INT, as well as regional venues such as Visual Studies Workshop, Gallery 74, the Baobab Cultural Center, Community Folk Art Center, Schwienfurth Memorial, and Squeaky Wheel. She has done live-mixed visuals for performances in collaboration with Juanita Suarez, fivebyfive, Dave Rivello, Reenah Golden, and for almost every Rochester Fringe, BIODANCE. She is an associate professor in the New Media Interactive Development program and MAGIC affiliate at Rochester Institute of Technology. Harris has a computer engineering degree from Carnegie Mellon University and a master's degree from the Interactive Telecommunications Program of NYU Tisch School of the Arts.