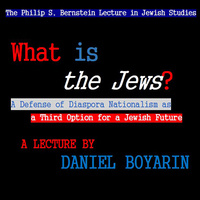 The Philip S. Bernstein Lecture Lecture presents What is the Jews?: A Defense of Diaspora Nationalism as a Third Option for a Jewish Future.  A lecture by Daniel Boyarin.

The dichotomy between the Jews is a "religion"/The Jews is a "nation" is a false dichotomy and certainly neither option provides an adequate answer if nation is taken to mean sovereign nation state (Zionism). Arguing, however, that it is only very recently that nation is taken to imply state, I propose and defend diaspora nationalism as a third option for characterizing the Jews. Basing myself on some recent archival work by Dmitry Shumsky and Noam Pianko, I suggest that even the founding Zionists did not have a conception of a nation state for the Jews.

Hermann P. and Sophia Taubman Professor of Talmudic Culture, Departments of Near Eastern Studies and Rhetoric, University of California at Berkeley, Affiliated Member Department of Women's Studies, Member of core faculty in the minor in Gay and Lesbian Studies and of the graduate group in Ancient History and Mediterranean Archaeology, and the designated emphasis in Women, Sexuality, Gender Studies, as well as the core faculty of the Center for the Study of Sexual Culture.  Professor Boyarin began his education at Goddard College and received his Masters of Hebrew Literature at the Jewish Theological Seminary.  His Education continued with a Masters of Semitic Languages at Columbia University where he did his thesis on The Babylonian Aramaic Verb According to Codex Hamburg. He was awarded with a Doctorate Degree in 1975 from the Jewish Theological Seminary of America upon completion of his dissertation on A Critical Edition of the Babylonian Talmud, Tractate Nazir.