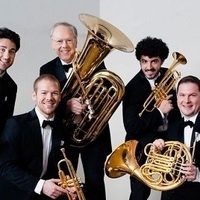 With four decades under their belts and an international reputation as on of the most popular brass ensembles today, Canadian Brass has truly earned the distinction of “the word’s most famous brass group.” Join Eastman alumnus Charles Daellenbach and the rest of the ensemble as they team up with the Grammy-nominated Eastman Wind Ensemble, conducted by Mark Scatterday for a night that’s not to be missed!