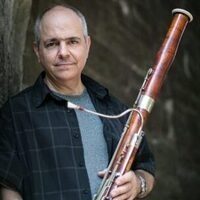 George Sakakeeny ESM BM ’78, has appeared as a soloist with orchestras throughout North and South America, Europe, and the Far East, including engagements in Vienna at the historic Musikverein, at Severance Hall with members of the Cleveland Orchestra, and a nationally televised concert in Japan under the baton of Seiji Ozawa. Three major works for bassoon and orchestra have been commissioned for him. Libby Larsen’s full moon in the city (2013), Peter Schickele’s Bassoon Concerto (1998,) and Viennese composer Alexander Blechinger’s Faggottkonzert (1997.)

As a soloist, he has been recorded numerous times including his latest solo CD, “full moon in the city” which features four previously unrecorded works for solo bassoon and orchestra, Blechinger’s Faggottkonzert with the Kiev Camerata, and his famous recording of the Villa-Lobos Duo for Oboe and Bassoon with oboist Alex Klein, on the IDRS 25th Anniversary CD. Other available media featuring George Sakakeeny include two teaching videos published by the new world symphony.