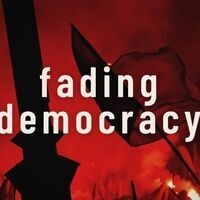 All are invited to attend the opening session of “Fading Democracy,” a three-part series of online panel discussions about the state of democracy and its challenges at the beginning of the twenty-first century.

The first conversation between the university professors of the Department of Political Science,  Randall Stone, and Gretchen Helmke, about the decline of democracy across the globe, and the international and domestic factors that appear to be causing it, will be streamed on Zoom.

Please RSVP by Wednesday, March 10. You will receive confirmation of your registration. The link to the event will be sent in a reminder email on the 10th.

Concerned about the state of democracy and its diminishing reach at the beginning of the twenty-first century, the Ph.D. students of the Department of History at the University of Rochester have developed an interdisciplinary initiative to organize a series of Zoom panel discussions about the collective “fading of democracy” in numerous European countries and its national and international repercussions. We intend to highlight the historical background and mutual interdependence of the present critical situations in Europe and in the United States. We believe that it is important to the people in the United States to understand and examine the mechanisms which brought the reversal of democratic governments towards authoritarianism.

Gretchen Helmke focuses her research on political institutions, democratic consolidation, and erosion, the rule of law,  and Latin American politics. Her most recent book is Institutions on the Edge: The Origins and Consequences of Institutional Instability in Latin America.  She is a co-founder of the Bright Line Watch project (http://brightlinewatch.org/), which monitors threats to democracy in the United States and in the world.

Randall Stone studies international organizations and political economy and directs the Skalny Center for Polish and Central European Studies. His articles have appeared in leading political science journals, and he is the author of three books: Controlling Institutions: International Organizations and the Global Economy (2011); Lending Credibility: The IMF and the Post-Communist Transition (2002); and Satellites and Commissars: Strategy and Conflict in the Politics of Soviet-bloc Trade (1996). He is currently working on a new book on the interactions between multinational corporations and international institutions.

The series continues on April 9 from 12-1:30 pm, when Tanya Bakhmetyeva (SBAI) will chair a panel titled “The Politics of Gender and Sexuality.” Her guests will be activists and scholars from Eastern Europe; the focus will be on women’s reproductive rights and LGBTQ+ rights in selected countries, especially in Poland, Belarus, and Russia.  Save the date!  Information on the rest of the series is forthcoming.

Please share this invitation with colleagues, students, and collaborators.