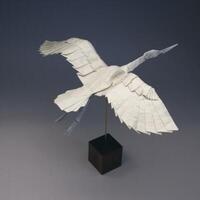 Robert From Flapping Birds to Space Telescopes: The Modern Science of Origami

Recent years have witnessed a revolution in the development and application of mathematical techniques to origami, the centuries- old Japanese art of paper folding. This talk describes how origami changed in the 20th century from a simple craft to an art form of mind-blowing complexity and realism. Much of this development came from the discovery of the mathematics of origami, which, though developed for art’s sake, has led to some surprising practical applications. The algorithms and theorems of origami design have shed light on long-standing mathematical questions and have solved practical engineering problems. Learn how origami has enabled safer airbags, Brobdingnagian space telescopes, and more.