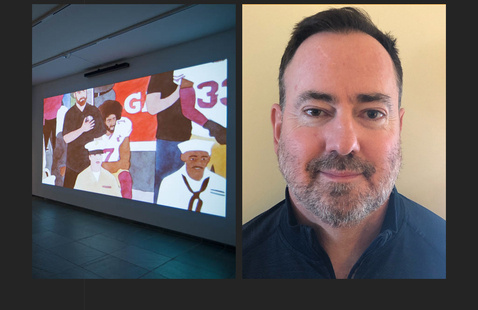 https://mag.rochester.edu/
Add to calendar
Save to Google Calendar Save to iCal Save to Outlook
In-Person and Virtual*
Since 2016, athletes have protested police brutality and the oppression of people of color by kneeling during the playing of “The Star-Spangled Banner.” Kota Ezawa’s National Anthem, now on view at MAG, is a multimedia exhibition that reflects on those protests. Join us as Stephen Brauer presents the historical and cultural context for this social movement.
*This program will take place in person and will be streamed live on Zoom.

Stephen Brauer is Associate Professor and Chair of the English Department at St. John Fisher College. He is the author of the recently published Criminality and the Modern: Contingency and Agency in Twentieth-Century America and has published articles on Fitzgerald’s The Great Gatsby, Faulkner’s Sanctuary, and David Fincher’s film version of Fight Club. He has also published essays on Mad Men, concussions in sport, and the football player Terrell Owens.
Image: Kota Ezawa, National Anthem (Cleveland Browns), 2019. Courtesy of the artist and Haines Gallery, San Francisco.

A Zoom link will be sent via email upon registration.