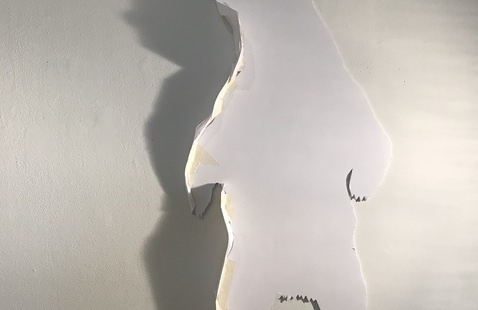 Locus/Focus is Jeff Tractenberg, Shun Yamamoto, and Scout Moore. The exhibition opens April 17 and runs through May 1.  Reception is April 17 from 5-7 PM

Emerging artists Jeff Tractenberg, Shun Yamamato, and Scout Moore will be sharing works prompted by the idea of mapping. Mapping possesses agency in that it uncovers ideas previously unseen or unimagined; it is most effective when it does so across seemingly exhausted grounds. The objective of this exhibition is less to mirror reality than to engender the reshaping of an idea, place or person.

Jeff Tractenberg takes inspiration from his humble, rural beginnings, and has taken his knowledge of farm-life to the art scene in an attempt to raise awareness of food production processes and agricultural importance around the world. As a young boy growing up in Atchison, Kansas, Tractenberg was fully immersed in the agricultural lifestyle. Now years later, his personal experience blends with broadened understanding of the world. In this show Tractenberg draws a map of shared experience where commonality is found in the culinary.

Shun Yamamoto was born on Japan’s Izu Peninsula in 1946. After a childhood full of loss, suffering, and fighting, he found art as a way to express himself and acquire stability in life. Yamamoto is primarily a painter, but he has also created multiple works using found materials. He is best known for his work, “Color in The Dark” (1978), which depicts Japan’s recovery from the turmoil of World War II. His work has been shown all over Japan, as well as the Tate Modern in London, and in the Museum of Modern Art in New York City.

Scout Moore grew up in a military household of taxidermists. Constantly moving from place to place, she was always interested in point to point connections. This interest developed into her exploring different methods, dimensions, and considerations that funnel into the concept of mapping and going from 3D to 2D. She didn’t enjoy taxidermy, but she found the aspect of presenting an animal in different forms intriguing such as taking a 3D form of a bear and transforming that into a flat bear rug. When Moore’s dog got hit by a car, she was conflicted about preserving her dog with taxidermy. She became interested in this conflict: what differentiated her dog from the other animals her parents preserved? This led her to question the differences between animals and humans, and ultimately concluded that humans aren’t taxidermied.

Also, on view in and around ASIS Gallery on April 17: works from Advanced Sculpture, Introduction to Video Art, and New Media and Emerging Practices. This event is open to the public.