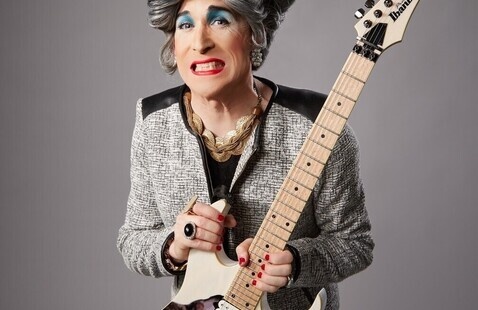 Performance artist, guitar virtuoso, and supermodel, Mrs. Smith comes to the University of Rochester for two nights of unbridled musical exploration, fully bonkers storytelling, and lady-of-a-certain-age pathos. From her Little House on the Prairie-style childhood, to her kidnapping at the hands of a Norwegian Death Metal band, Mrs Smith will leave no stone unturned and no note unplayed.

Mrs. Smith is the larger than life “woman on the verge” who is taking the world by storm with her guitar shredding antics and epic search for her missing cat, Carlyle. Mrs. Smith has appeared on America's Got Talent, PBS Television, and has performed sold-out shows at Joe's Pub at the Public Theater, The Cutting Room, Williamsburg Music Hall, and Zebulon, LA. Along the way, she's picked up endorsements by top music brands and starred in a Gucci commercial directed by Petra Collins. Mrs. Smith appears weekly at Susanne Bartsch’s Follies at the McKittrick Hotel in New York City with downtown luminaries Joey Arias, Amanda Lapore, and Murray Hill.

Presented by the International Theatre Program, with support  from the Institute for the Performing Arts, Arts@UR UCIS Cluster, and the Susan B. Anthony Institute.

University of Rochester students free (10/19 only), $10 for general admission.