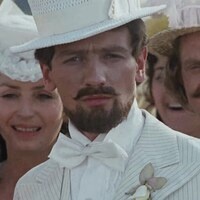 Screenplay: Jerzy Antczak, based on the novel by Maria Dąbrowska

The film portrays the life of two generations of the Niechcic family during a half century of Polish history, between 1865 and 1914. Barbara Niechcic (Jadwiga Barańska) escapes from the town of Kaliniec at the outbreak of World War I. She recalls her life’s triumphs and hardships as her family attempts to hold itself together and retain its dignity despite persecution, expulsion, and losing everything it holds dear. This colorful family saga offers rich atmosphere and a sentimental look at the impoverished nobility, the genesis of the intelligentsia.

Nights and Days was nominated for the Academy Award for Best Foreign Language Film, and Barańska won the 1976 best actress award at the Berlin Film Festival for her inspired performance