By Skalny Center for Polish and Central European Studies 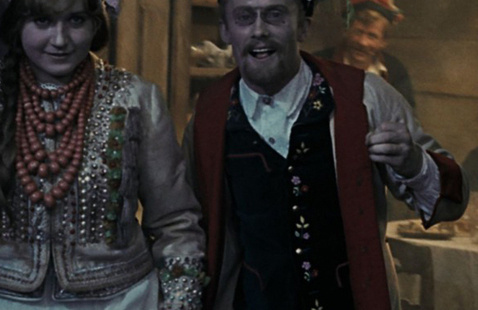 Andrzej Wajda, recipient of a lifetime-achievement Oscar in 2000, adapted a turn-of-the-century play by Stanisław Wyspiański that embodies a poetic exploration of Polish society in a crucial period during the mid-19th century, when Poland had disappeared as a nation. The play links, in a unique way, a description of a real wedding which Wyspiański witnessed in late autumn of 1900, with philosophical, historical and liberation issues very important to the Polish society at the time.

A poet marries a peasant girl in Kraków, across class lines. As the reception moves from the city to the village and guests revel in the union, ghosts of characters from Poland’s history and from legends begin to appear, representing the guilty consciences of the characters and reminding them of their patriotic duty. The film reveals the nation’s shortcomings: drunkenness, inclination to day-dreaming, social inequalities, and the intelligentsia’s ineffectualness and political inertia. It can be interpreted as referring both to the nineteenth century and to the present.