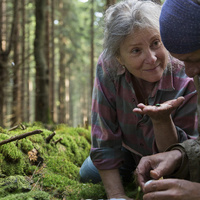 Retired civil engineer Duszejko lives a secluded life in a mountain village close to the border between Poland and the Czech Republic. On a winter’s night she discovers the dead body of her neighbor, a poacher. The circumstances of his death are extremely mysterious, as the only traces around his house are those of a deer. More men die in a similarly mysterious way, all of them passionate hunters. Were these men killed by wild animals? Or has someone been provoked to pursue a bloody vendetta? Spoor is set in a landscape of changing seasons; however, the wild beauty of the countryside cannot hide the corrupt nature, cruelty and stupidity of the people who live there.

Spoor won the Silver Bear - Alfred Bauer Prize at the 67th Berlin International Film Festival - for a feature film that opens new perspectives. It was selected as the Polish entry for the Best Foreign Language Film at the 2018 Academy Awards.

Following the screening: Closing of the Festival. Reception at the Theater 1.