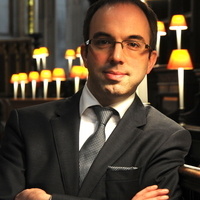 Simon Johnson, organist at St. Paul’s Cathedral in London, opens the first concert of the 2019-2020 Rochester Celebrity Organ Recital Series (RCORS) at Third Presbyterian Church on 4 Meigs St, Rochester, NY.  Featuring music from France, Germany, and England, his program will highlight the versatility of Third Presbyterian’s 1952/91 Austin organ, one of the most respected organs in the Rochester area.

Simon Johnson has been the Organist of St Paul’s Cathedral for 12 years.  During this time he has played for Her Majesty the Queen, the Dalai Lama, numerous Prime Ministers and Archbishops, and at all the state occasions that have taken place at St Paul’s during his tenure.

Recitals have taken him all over the USA and Europe, including a Royal Festival Hall debut in 2017.  Last year, St Paul’s was sold out for his performance of Holst’s The Planets with link-ups to NASA and the International Space Station. Forthcoming work includes two solo tours of the USA.

The Rochester Celebrity Organ Recital Series (RCORS) is administered by the Rochester AGO Chapter, collaborating with the Eastman School of Music, WXXI, and several local churches to invite some of today’s leading concert organists to perform on Rochester’s rich array of pipe organs. More information on the concert series can be found at rocago.org.

$12 for general admission, $10 for seniors and AGO members, and $5 for students