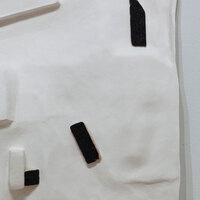 February 25 – March 15, 2019: Work by artist, Rebecca Wing.
Wing’s artistic practice leans towards three-dimensionality but often employs thin planes and flat surfaces to do so. There’s a lot of nebulous space in between sculpture and two-dimensional modalities that she gravitates towards–partly because she is often trying to capture a mysterious moment on the verge of happening, and liminal spaces heighten that sense of ambiguity.

Many of her forms and gestures are initially derived from generic objects of utility–space age vehicles, farming equipment, the concrete bars that mark a parking spot–or inadvertent situations that result from the circumstances–a pile of pallets covered in a green tarp, a plastic dumpster lid as it melts in the heat. Generally, she will pull a single gesture that she likes from something that she has seen in the world and co-opts it into something more ambiguous, that suggests kinetic potential–a slow draping, melting, rolling or floating–fixed rigidly in space by static materials. She is curious about the ways in which functional objects necessitate specific forms just as much as the instances in which they fail to function. She spends most of her time making things that don’t have to perform a specific task, so adding these gestures of utility is like an enhancement of their practical value.