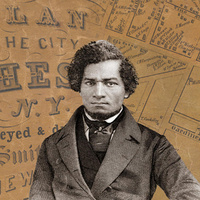 On view through October 6: In recognition of the 200th anniversary of the birth of Frederick Douglass, River Campus Libraries’ Department of Rare Books, Special Collections, and Preservation (RBSCP) has the honor to share some of our rich holdings relating to this important 19th century American activist, publisher, author, and statesman. The exhibition showcases many aspects of Douglass’s life and legacy as reflected though archival material including letters, published materials, maps, photographs, newspapers, and ephemera.

Frederick Douglass one of the most important figures in American history, and he considered Rochester his home town, living in the city from 1848 until 1872, when he moved to Washington D.C. Upon his death in 1895, Douglass was returned to Rochester, and is buried in Mount Hope Cemetery. How did Rochester as a city foster such progressive and radical thinking and action? Though life was very different in Rochester in the mid-19th century, what about our city helps to sustain these progressive ideals into the 21stcentury?

This exhibit is part of the year-long celebration of Frederick Douglass in the city of Rochester, of which the River Campus Libraries is a partner.

It is on view February 14 - October 6, 2018 in Department of Rare Books and Special Collections on the 2nd floor of Rush Rhees Library during department hours.