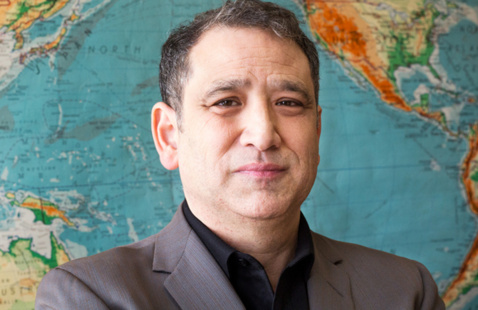 Drawing on collaborative, community-engaged historical research in California, Professor Chang's talk will consider how colonial processes and the movement of diverse peoples on the Pacific Coast have shaped racial and ethnic identities as well as interethnic relationships in the region. Professor Chang invites us to think, in other words, about some of the many consequences of migration and mobility.

David A. Chang is a professor of history at the University of Minnesota. A historian of indigenous people, race, colonialism, and anticolonialism in the United States and Hawai'i, his research focuses especially on the histories of American Indian and Native Hawaiian people.

He is the author of two books. The World and All the Things upon It: Native Hawaiian Geographies of Exploration (2016) draws on long-ignored Hawaiian-language sources—stories, songs, chants, and political prose—to trace how Native Hawaiians in the long nineteenth century explored the outside world, generated their own understandings of it, and worked to influence their metaphorical "place in the world." His award-winning first book, The Color of the Land: Race, Nation, and the Politics of Landownership in Oklahoma, 1832–1929 (2010), argues for the central place of struggles over the ownership of Native American lands in the making of the racial and national categories that operated among American Indians, African Americans, and whites in nineteenth- and twentieth-century Oklahoma.

He is currently working on two projects: the global and cosmopolitan circuits linking nationalists in Italy, Hawai'i, and China in the late nineteenth century; and the eighteenth-century travels of a Hawaiian chief, Ka'iana'ahu'ula, whose voyage to China, the Philippines, Palau, Alaska, and Vancouver Island convinced him that he could shape relations with westerners to his own advantage.

ATTENDANCE IN PERSON DOES NOT REQUIRE REGISTRATION. FOR A ZOOM LINK, PLEASE REGISTER.