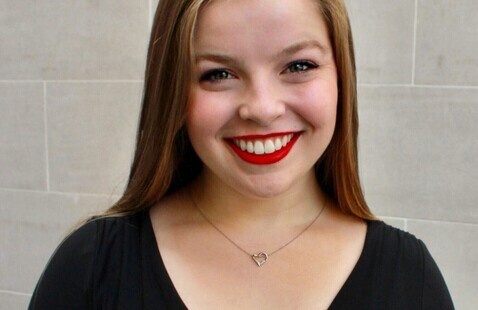 Gwen Paker (she/her) is an award-winning soprano equally at home on the operatic stage and in the concert hall. While studying at the Eastman School of Music with Professor Robert Swensen, Ms. Paker won first prize in the 2022 Friends of Eastman Opera Voice Competition and the 2019 Eastman Voice Department Concerto Competition.

An avid performer of opera, Ms. Paker made her professional operatic debut as Gertrude Stein in Thomson’s The Mother of Us All with the Rochester Philharmonic Orchestra and has starred in several productions with Eastman Opera Theatre. Highlights from her credits with Eastman Opera Theatre include leading roles like Léontine in Bologne’s L’amant anonyme, Dr. Nora Lear in Davis’s Lear On The 2nd Floor, Eleonora in Salieri’s Prima la music e poi le parole, and Baker’s Wife cover in Sondheim’s Into The Woods. Ms. Paker’s other credits with Eastman Opera Theatre include Erste Dame in a scene from Mozart’s Die Zauberflöte, La Chauve-Souris in Ravel’s L’enfant et les sortilèges, and Laura in Pen and Harmon’s Goblin Market (though the performance of Goblin Market was cancelled due to COVID-19). In addition to her work at Eastman, Ms. Paker has spent several summers as a Studio Artist with various operatic training programs, including Opera In The Ozarks, the German Vocal Arts Institute, and Oberlin In Italy. With Opera in the Ozarks, she performed as Maria in Rodriguez’s children’s opera Monkey See, Monkey Do and was awarded “Outstanding Performance by a Female Studio Artist.”

Ms. Paker has also excelled as a concert and oratorio soloist, culminating in her performance of Barber’s Knoxville: Summer of 1915 with the Eastman Philharmonia, conducted by Austin Chanu. Earlier, Ms. Paker was the soprano soloist in Liszt’s Missa Solemnis with the Eastman School Symphony Orchestra and Eastman- Rochester Chorus, conducted by Dr. William Weinert. She also covered the soprano soloist in Britten’s War Requiem with the Eastman Philharmonia, Eastman-Rochester Chorus, and Eastman Chorale.

Ms. Paker’s passion for music extends beyond performance, and she flourishes as a voice teacher and arts administrator. Applying her voice pedagogy training from the Eastman School of Music, Ms. Paker maintains a private voice studio and teaches online lessons to students of all ages. Ms. Paker also uses her extensive leadership experience to pursue opportunities in arts administration. Currently working as the Administrative Coordinator for Finger Lakes Opera, she has also worked with The Hochstein School, Opera On Tap Boston, and the Eastman Institute for Music Leadership. Always learning and building on her skills, she has pursued positions in development, marketing, and social-media management.

In all of her work as a performer, teacher, and arts administrator, Ms. Paker supports diversity, equity, and inclusion initiatives and is a strong advocate for increased equity and justice in opera.