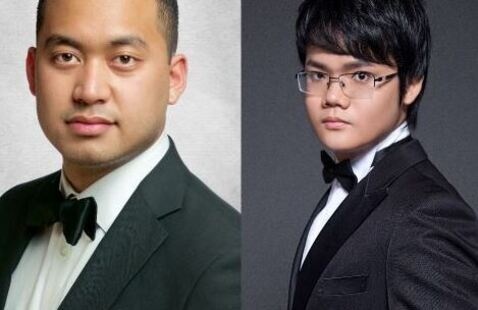 Pianist and educator Jonathan Mamora strives to uplift and positively influence others using music as a means for service.

An Indonesian-American and a native of Southern California, Jonathan has served as a church pianist and organist—the result of having been enrolled in piano lessons by his parents for the purpose of becoming a church musician. Jonathan aims to use music as service not only in the church, but also in the community through homes, schools, community centers, and the concert hall.

Jonathan currently serves as the Music Director and Organist of St. John’s Episcopal Church in Clifton Springs, NY. He often performs as a collaborative pianist for vocalists, instrumentalists, ensembles, and choirs. As a collaborator, Jonathan holds a graduate assistantship in accompanying at the Eastman School of Music and has received the Eastman Excellence in Accompanying Award. In addition to the piano and organ, this multi-talented musician has also performed as a percussionist, vocalist, historical keyboardist (harpsichord, fortepiano), and conductor.

Jonathan also values education as an important tool in music making. He has previously taught piano and music theory/ear training for various institutions and has conducted a week-long series of master classes and concerts at the University of the Southern Caribbean in Trinidad and Tobago. He is currently serving as Instructor for Music Theory and Aural Musicianship at the Eastman School of Music, as well as teaching piano for the Eastman Community Music School.

Jonathan is a candidate for the Doctor of Musical Arts in Piano Performance and Literature at the Eastman School of Music, studying with and serving as studio assistant for Douglas Humpherys. He received his Bachelor of Music from La Sierra University and his Master of Music from The Juilliard School. Previous teachers include Elvin Rodríguez and Hung-Kuan Chen.

Qisheng Ye currently studies at Eastman School of music for his DMA degree under the guidance of Professor Douglass Humpherys. Ye holds the Bachelor of Music degree in the Central Conservatory of Music in 2018 under the tutelage of Professor Xiang Zou. He received his Master of Music degree in piano performance major from Eastman School of Music in 2020. Ye began learning piano at age of 6 and has performed his first solo recital debut at age of 10. Over the years, Ye has won numerous national competitions in China including the YAMAHA scholarship in 2012, the second prize of the Shenzhen Piano Competition in 2014 and the second prize of the “Pearl River” National Piano competition in 2015. He had also performed in masterclasses conducted by Gary Graffman, Joseph Banowetz, Cristina Ortiz, Eleanor Wong and Boris Slutsky.