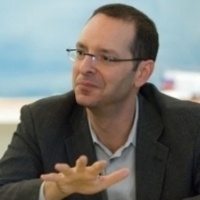 **CANCELLED - Lecture: The Future of Thinking (in the Humanities)

Amir Eshel is Edward Clark Crossett Professor of Humanistic Studies, Professor of German Studies and Comparative Literature and an Affiliated Faculty at The Taube Center for Jewish Studies and The Europe Center at Stanford University’s Freeman Spogli Institute for International Studies. He is also the faculty director of Stanford’s research group on The Contemporary and of the Poetic Media Lab at Stanford’s Center for Spatial and Textual Analysis (CESTA). His research focuses on contemporary literature and the arts as they touch on memory, history, politics, and ethics.

Amir Eshel is the author of Poetic Thinking Today (forthcoming with Stanford University Press in 2019 and with Suhrkamp Verlag (in German) in 2020). Previous books include Futurity: Contemporary Literature and the Quest for the Past (The University of Chicago Press in 2013). The German version of the book, Zukünftigkeit: Die zeitgenössische Literatur und die Vergangenheit, appeared in 2012 with Suhrkamp Verlag. Together with Rachel Seelig, he co-edited The German-Hebrew Dialogue: Studies of Encounter and Exchange (2018). In 2014, he co-edited with Ulrich Baer a book of essays on Hannah Arendt, Hannah Arendt: zwischen den Disziplinen; and also co-edited a book of essays on Barbara Honigmann with Yfaat Weiss, Kurz hinter der Wahrheit und dicht neben der Lüge (2013).