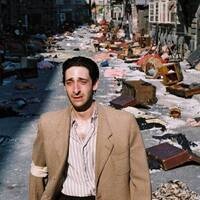 Screenplay: Ronald Harwood, based on the book by Władysław Szpilman

Based on the autobiography of the acclaimed Polish Jewish composer and pianist Władysław Szpilman, the film details his experiences in Warsaw during the Nazi occupation. Together with all the city's Jews, Szpilman’s family was forced to give up their possessions and move to the Warsaw ghetto. He miraculously avoided deportation from the Ghetto to a Nazi death camp and went into hiding in the ruins of Warsaw, scavenging for food and shelter. At the 75th Academy Awards, The Pianist  won Oscars for Best Director, Best Adapted Screenplay, and Best Actor, and was nominated for four other awards, including Best Picture. The film also won the Palme d’Or at the 2002 Cannes Film Festival, among many other awards.