By Department of Modern Languages and Cultures 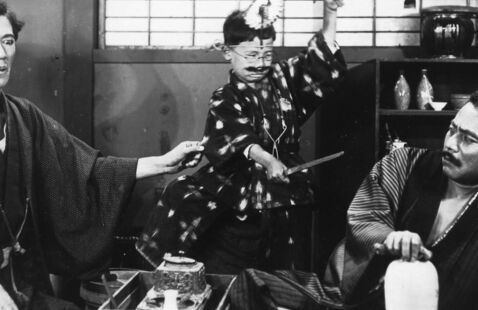 George Eastman Museum Dryden Theatre View map $7 members, $10 nonmembers, $5 students
Add to calendar
Save to Google Calendar Save to iCal Save to Outlook

https://www.eastman.org/event/film-screenings-live-music/tokkan-kozo-passing-fancy
View map
Add to calendar
Save to Google Calendar Save to iCal Save to Outlook

For more info, see the UR Digital Scholarship blog post at https://dslab.lib.rochester.edu/tokkan-kozo/ and the Dryden Theatre calendar (excerpt below):

Silent Tuesdays. Ozu, like many in the Japanese film industry, was slow to move to sound films and continued to make silent films into 1936. This bittersweet melodrama follows Kihachi, a brewery worker who happens upon a destitute young woman one night and gives her a place to sleep. He finds her a job and starts to take better care of himself, hoping she will notice, but she thinks of him as little more than a kind uncle. As Kihachi’s son becomes jealous, a situation arises that will put this precarious situation in jeopardy. This film will be preceded by an Ozu short that has just been rediscovered and made its world premiere at the Giornate del Cinema Muto in Pordenone, Italy. Live piano by Philip C. Carli

Department of Modern Languages and Cultures