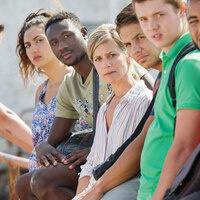 In The Workshop, acclaimed writer-director Laurent Cantet takes an illuminating approach to a variety of key issues haunting contemporary France. Olivia, a successful Parisian novelist, has been hired to spend the summer in La Ciotat, a beautiful but economically battered town on the Mediterranean, teaching a writing workshop for a diverse group of young people whose only common denominator, as is so often the case among twentysomethings in the French provinces, is that they are unemployed. Among them are an emancipated but religious Muslim woman, students proud of their region’s strong but declining history of labor movements, recent immigrants, some hedonists focused on the next party, and Antoine, a strikingly intelligent, confrontational young man with affiliations to extreme right-wing groups. Through class discussions and the conflicts that ensue, Cantet presents an unflinching look at the delicate integration of conflicting religious and cultural beliefs in a period plagued by the threat of terrorism. And as Olivia attempts to understand what brought Antoine to embrace a reprehensible ideology, The Workshop builds into a breathtaking thriller that deftly avoids formulaic answers to provide startling insight into a situation that applies far beyond France.