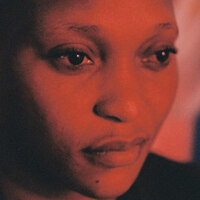 Félicité is a nightclub singer in a little bar in Kinshasa who lives alone with her teenage son Samo. When Samo severely injures himself in a motorcycle accident, Félicité must find a way to raise the money to pay for an operation or allow her son’s leg to be amputated. The originality and power of French-Senegalese director Alain Gomis’s fourth feature lies in the way it transcends this simple against-the-clock narrative, the kind of story that has driven films of social realism from Bicycle Thieves to the Dardenne brothers, to create a shifting, complex portrait of the struggles, joys, and imagination of a modern-day heroine—and by extension, of the city she lives in. Filming in the Democratic Republic of Congo, a country previously unfamiliar to him, Gomis confirms the tremendous promise of his earlier films, walking a porous line between dream and waking life, magic and bureaucracy, observation and fantasy, that at its best suggests a new cinematic language. Alive with the diverse sounds of various Kinshasa musicians, Félicité is an engrossing, deep dive into the days and, especially, nights of a city by turns nightmarish and surprisingly radiant.

Wow,this is "a must watch"