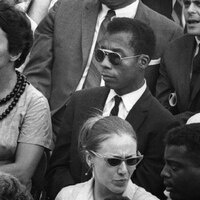 Tournees Film Festival: I Am Not Your Negro

Haitian filmmaker Raoul Peck’s brilliant documentary on racism in America is an essential work for our era, drawing a clear line from the Civil Rights struggle to today’s Black Lives Matter movement via the thought of James Baldwin, one of the most lucid, fearless American thinkers on race (and many other matters). Based on Baldwin’s unfinished manuscript Remember This House, which considered the history of racism through memories of Baldwin’s friends the civil rights leaders Martin Luther King Jr., Malcolm X, and Medgar Evers,

I Am Not Your Negro analyzes white denial and black experience of racial oppression in a historical and contemporary context, bringing Baldwin’s observations into the present through powerful juxtapositions of his words (read in voiceover by Samuel L. Jackson) and, for instance, images of the Ferguson protests. Peck also generously culls from archival sources, notably the extensive talk show appearance in which Baldwin, an eloquent and spirited orator, publicly expresses that the “negro” is a white construct, and anything but a definition of who he is. By providing an impassioned, accessible introduction to James Baldwin’s work and thought, Peck has given us a crucial reference to address ongoing injustice in the United States.