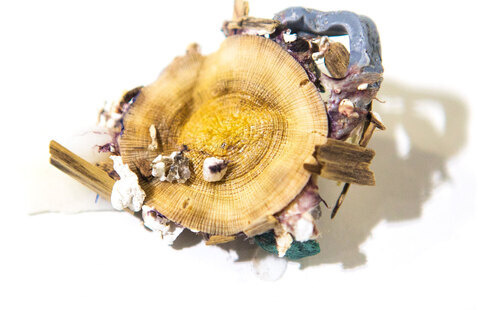 Rush Rhees Library, Frontispace Gallery at the Art and Music Library Ground Floor View map Free Event
Add to calendar
Save to Google Calendar Save to iCal Save to Outlook

https://www.sageart.center/frontispace-current
View map Free Event
Add to calendar
Save to Google Calendar Save to iCal Save to Outlook

Frontispace is pleased to announce an exhibition by Hanae Utamura, Transmutation.

Inspired by microbes that eat radioactive materials and micro-plastics, this exhibition imagines the emergence of life forms from within toxic environments. It highlights the resilience of nature, and how nature transmutes energy from within the ruins of earth and recovers after disasters.

The sun creates energy through a process called nuclear fusion and energizes verdant wilderness that flourishes in the absence of human intervention. Disarmament to Minerals, 2022, imagines the distant future when nuclear disarmament is realized worldwide, by reversing time, and tracing the timeline backward from an imagined impending apocalypse. In Seafloor Core Breath Glass, 2020, the geologic sigh caught in the glass speaks out from the distant past as if it is an ancient Greek oracle.

In the deserted zones at nuclear disaster sites where the natural environment has been exposed to nuclear radiation, plants flourish when human beings flee. Even though the plants encounter toxic radiation, the plants have the strength and energy to adapt and thrive in the deserted zones of the nuclear disasters. Some scientists speculate that this is because of an inbuilt sense of memory in the plants from ancient times, when radiation levels were higher than today.

Hanae Utamura is a Japanese visual artist based in both New York City, and Buffalo, New York.
Utamura’s media include video, performance, installation, and sculpture. She connects human beings and earth, using the physical human body as a conduit. Negotiations and conflicts between the human and the non-human, and how all the varieties of the wills of life manifest, have been the central focus of her practice. By decentralizing the human perspective, Utamura diversifies historical narratives, and enters the imagination of nature.

Frontispace is at the entrance to the Art and Music Library

Hours can be found here: https://www.library.rochester.edu/about/hours/art-music