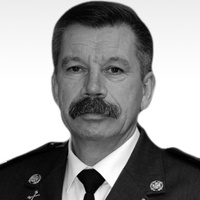 Major General Volodymyr Havrylov started his military career in Air Defense units in 1981 upon graduation from the Institute of Electronics Technologies. In 1991 he joined the newly emerged Ukrainian Armed Forces and was selected to the first group of Ukrainian military attachés, and has since occupied tours in the United States, the United Kingdom and Romania. Prior to being appointed Defense Attaché in the United States in September 2015 he was the Commandant of the Military Diplomatic Academy in Kyiv. Maj. Gen. Havrylov has also participated in the peacekeeping operation in Balkans in 1998 and the Anti-Terrorist Operation against Russian aggression in eastern Ukraine in 2015. He speaks four languages: Ukrainian, Russian, English and Romanian.

Additionally, there will be a presentation by Open World delegate from Ukraine, Oleksandr Kulha, Director of the Innovations Department, Taurida National