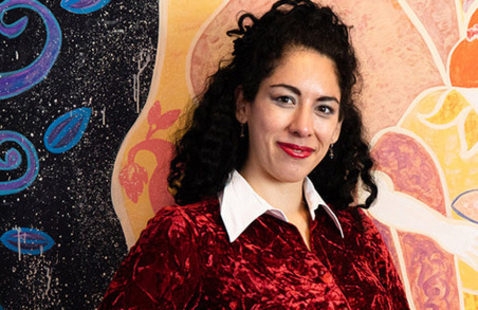 Poetry has a negative stereotype of being something for pretentious people. Humor and comedy are seen as something for the masses and often derided in academic contexts. But these ideas do not have to be true. Poetry can offer many avenues for individual and collective expression that can be down-to-earth and accessible to diverse groups of people. Humor can be smart, developed, progressive, and geared toward social change.

"I will share my experiences of combining poetry and humor in three recent endeavors: 1. humor in a choreopoem production for Theater Alliance at Anacostia Playhouse in Washington, D.C., 2. a funny poetry series at the Broadway Comedy Club in New York City, and 3. independent publications in magazines and books. Participants will learn what I have taken away from these experiences and what suggestions I have for them developing similar projects during the pandemic and moving forward."

Christine Stoddard is a Salvadoran-American writer, director, performer, and multi-hyphenated artist creating books, films, plays, murals, etc. She founded Quail Bell Magazine and Quail Bell Press & Productions. She recently premiered her first feature film, Sirena's Gallery, after directing several shorts, such as Bottled, Virtual Caress, Butterflies, Drunken History, and Brooklyn Burial. Her books include Heaven is a Photograph, Hello, New York: The Living And Dead, Naomi & The Reckoning, Desert Fox by the Sea, Belladonna Magic, and Water for the Cactus Woman, among others. She will be directing her nationally award-winning play, "Mi Abuela, Queen of Nightmares" at the Gene Frankel Theatre in NYC in 2022. Previously, she was the first-ever artist-in-residence at Lenox Hill Neighborhood House in Manhattan and served as an inaugural AnkhLave Arts Alliance artist fellow at the Queens Botanical Garden. Her work has appeared in Ms. Magazine, The Huffington Post, Portland Review, Bustle, and beyond.

Institute for the Performing Arts