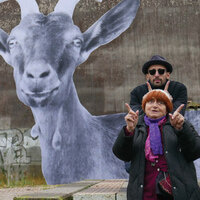 With Faces, Places, 89-year-old powerhouse Agnès Varda teams with the world-famous young street artist JR to make a film as wide-ranging as it is personal, as fanciful as it is pointed. Setting off on French country roads to find subjects for JR’s trademark mural-size portrait photographs, the two artists focus on people generally outside of the spotlight: retired miners, factors workers, the wives of dockers, and farmers. Each encounter fills in another piece of an idiosyncratic portrait of modern-day France, as well as the evolving relationship between open-hearted Agnès Varda and mysterious JR. The give-and-take between Varda and JR plays out in a fascinating through-line devoted to Jean-Luc Godard, Varda’s old friend and sole surviving colleague of the French New Wave. But make no mistake: while the film is credited to both artists, Varda is definitely calling the shots. As ever, her montage is allusive, playful, rapid-fire, occasionally jarring—in short, totally in keeping with her singular way of thinking. Her generosity in sharing her life and thought with us deep into old age is a cause to rejoice. Faces, Places was nominated for an Academy Award for the Best Documentary of 2017.