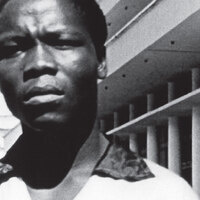 Few films have had as sweeping an impact as Jean Rouch’s 1958 portrait of three Nigerien migrants in Treichville, a bustling neighborhood in Abidjan, Ivory Coast. As an ethnographic film, Moi, un noir was both politically and aesthetically revolutionary through its attempt to address the problem of the ethnographer (nearly always a white man) filming subjects (nearly always people of color) objectified and stripped of agency by the filmmaking process. Here, Rouch began by filming his friend Oumarou Ganda (later to become a pioneer of African cinema) and two other young men seeking their fortune in Abidjan, inviting them to improvise scenes as they worked the docks by day and dreamed of a better life by night. He then asked Oumarou Ganda to add his own voiceover commentary to the images of himself and his friends. And so, the documentary became a shared project, in which the people on screen actively participated in their representation and revealed not only the surface of their daily lives, but the stuff of their dreams. This vibrant, rough-hewn film had a determining influence on the French New Wave and the cinéma vérité movement of the sixties. It remains a touchstone for today’s documentary/fiction hybrids.