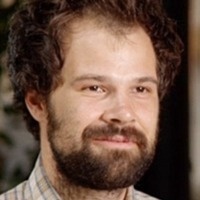 Join the Goergen Institute for Data Science and Studio X at the River Campus Libraries for Virtual Reality Use in Chemistry and Biology, a conversation with David Glowacki.

Dr David Glowacki is a theoretical chemist, author, inventor, and the creator of danceroom spectroscopy, an interactive science-meets-art installation that has introduced the beauty and complexity of the atomic world to thousands of people across the UK and Europe.

Originally from Milwaukee, David came to the UK in 2003 on a Fulbright scholarship to study cultural theory at the University of Manchester, subsequently completing a PhD in physical chemistry at Leeds before arriving at Bristol.

Based in Bristol’s Centre for Computational Chemistry, he has collaborations across several areas of chemistry, using tools from classical and quantum mechanics to understand a range of nano-physics relevant to gases, solids, and liquids.

David’s inimitable approach to investigating quantum and classical dynamics has seen him published across a range of subjects and publications, including high level scientific journals, and has earned him a global reputation in both the scientific and creative world, thanks in part to danceroom spectroscopy, which to date, has featured at Bristol’s Arnolfini, the 2012 Cultural Olympiad, and London’s Barbican Arts Centre.

Voices of XR is a Studio X speaker series, presented in collaboration with the Goergen Institute for Data Science. Speakers are scholars, artists, and extended reality professionals who discuss their work with immersive technologies across disciplines and industries. All talks are free and open to the general public. See the full spring 2021 series.

This series is generously supported by the National Science Foundation (NSF) Research Traineeship (NRT) program as part of the Interdisciplinary Graduate Training in the Science, Technology, and Applications of Augmented and Virtual Reality at the University of Rochester (#1922591).