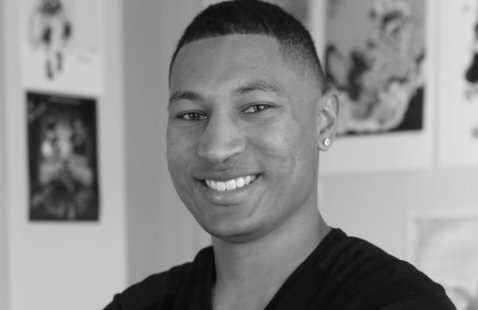 Join the Goergen Institute for Data Science and Studio X at the River Campus Libraries for Interdisciplinary Problem Solving with Innovation
and Emerging Technology, a conversation with Steven Christian.

A visual artist living in Portland, Oregon, Steven Christian (he/him/his) took an untraditional path to the augmented reality (AR) space. He grew up a three-sport (football, basketball, and baseball) athlete. But it was his skill in football that earned him a scholarship to the University of Hawaii. There, he injured his hips and had to undergo  reconstructive bilateral hip surgery. During his recovery, he explored art, comics, and developing content for mobile devices. It served as self-expression as well as therapy.

Christian's artistic exploration prompted him to earn an MA from Oregon State, where he focused on the visual representation of social justice issues, primarily through animation and illustration.

Now, as the founder of Iltopia Studios, he aims to lower the bar for entry into AR, a world that has evolved largely without contributions or influence from Black and Brown communities. His work empowers individuals within these communities to express themselves through creativity, art, and technology. He also gives back to his own community by  working with various nonprofit organizations, and he works as a teaching artist and mentor for Portland Public Schools and Portland Community College.  On top of all that, he is currently pursuing medical school with the aspiration of using his creative and technical skills to combat health disparities in marginalized communities.

Voices of XR is a Studio X speaker series, presented in collaboration with the Goergen Institute for Data Science. Speakers are scholars, artists, and extended reality professionals who discuss their work with immersive technologies across disciplines and industries. All talks are free and open to the general public.  See the full spring 2021 series.

This series is generously supported by the National Science Foundation (NSF) Research Traineeship (NRT) program as part of the Interdisciplinary Graduate Training in the Science, Technology, and Applications of Augmented and Virtual Reality at the University of Rochester (#1922591).