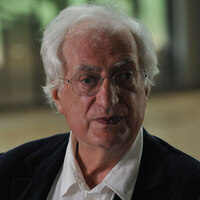 NEW TIME & LOCATION
Closing of the festival, French celebration
Refreshments will be provided

If it didn’t sound so pedantic, one could easily call Bertrand Tavernier’s epic appreciation of French cinema “French film 101.” Luckily, Tavernier uses his own love of film as the guiding principle here, mixing personal anecdotes and brilliantly lucid analysis to compose a thrilling, idiosyncratic history of a golden age of French cinema extending from 1941 to 1971—the period ranging from Tavernier’s birth to his debut as a powerhouse of French cinema in his own right. In the thirty years before he became a director, Tavernier fell in love with movies and came to work for some of his heroes, including Jean Renoir and Jean-Pierre Melville. Part of the secret of My Journey is that Tavernier is able to blend nuts and bolts evaluation—what makes a scene work—with an insider’s perspective on these great directors—which often helps to explain what makes a scene sing. Full of judiciously selected clips, My Journey is a private tour conducted by the reigning expert on French cinema, an essential primer that sheds new light on the work of beloved masters like Renoir and Godard and invites the viewer to discover overlooked auteurs such as Jacques Becker and Julien Duvivier.