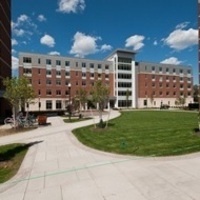 O’Brien Hall, the first dormitory built since 1968. O’Brien Hall houses 148 students in an assortment of singles and doubles and joins Anderson and Wilder Halls to form a new complex known as Jackson Court.

Public spaces include a dance studio and music practice rooms.